How is the seasonal variation? New cruise in October 2015 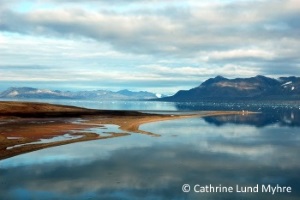 Measurements West of Prins Karls Forland in summer 2014 suggest that the amount of methane from the seabed that actually reaches the atmosphere is heavily influenced by ocean water stratification. However, it is expected that ocean stratification varies over the course of a year as temperatures and wind speeds change. To test the effect of seasonal changes in the  ocean, autumn-time measurements in the same area are ongoing (October 2015). In addition to online measurements of CH4/CO2/CO and flask sampling, a prototype probe is being tested in collaboration with LGGE (Laboratoire de Glaciologie et Géophysique de l’Environnement) to be able to measure time resolved methane in the water column up to several hundred meters depth.

Summer cruise in the Barent’s Sea

The summer 2015 Barent’s Sea cruise ended mid-July. In addition to the successful collection of online data on CH4, CO2, CO and flask samples for quantification of light hydrocarbons, two samples of pure gas hydrates have been taken from drill cores south of Svalbard earlier this summer. Quantification of the light hydrocarbons in these samples will give a clearer picture of how a hydrate signal would look if hydrate gases reach atmosphere.

Anna Silyakova, CAGE, working with the methane samples, and transferring them to the new sampling equipment developed during MOCA for analysis at NILU.

This website uses cookies to improve your experience while you navigate through the website. Out of these, the cookies that are categorized as necessary are stored on your browser as they are essential for the working of basic functionalities of the website. We also use third-party cookies that help us analyze and understand how you use this website. These cookies will be stored in your browser only with your consent. You also have the option to opt-out of these cookies. But opting out of some of these cookies may affect your browsing experience.
Necessary Always Enabled

Any cookies that may not be particularly necessary for the website to function and is used specifically to collect user personal data via analytics, ads, other embedded contents are termed as non-necessary cookies. It is mandatory to procure user consent prior to running these cookies on your website.